How Do Black Diamonds Get Their Color?

Black diamonds are made of carbon. Carbon is a building block for many of earths living and non-living forms. Diamonds get their structure from a unique crystal made up of carbon atoms. 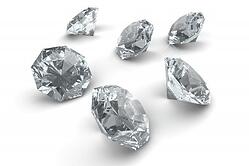 The atoms cluster into the shape of tetrahedrons (with four faces) which disperse light through them, causing the diamond itself to act like a prism. They get their color from plate-like inclusions of graphite. Inclusions for the most part are particles of gas, graphite or other local elements that become trapped within them during their formation process.

Also Read: Why are colored diamonds generally worth less than white diamonds?

These diamonds are also referred to as carbonado diamonds. They are very popular because of how rare they are. They have only been found in two places in the world—Brazil, and Central African Republic. Their popularity is only matched by natural red, pink or purple diamonds. There are fewer black diamonds than there are colorless diamonds, or the brown, blue and green diamonds. Unlike their counterparts—these diamonds do not sparkle with quite the same luster as other diamonds do.

When found, they are typically pea-sized or pulled from larger aggregates of millions of the crystals all stuck together. They seem to have a hardness exceeding conventional diamonds because they do not cleave along crystal plains, and are made from a porous material usually full of bubbles appearing to result from gases present when they are formed. Regular diamonds are formed deep within the earth, where the high-pressure does not allow gases to exist.

These diamonds are usually opaque. As a result, 'cut' parameters are of little importance, since there is no reflection or refraction of light producing the brilliance and fire of more ordinary diamonds.

Most scientists believe that they are formed near alluvial deposits, and not from within the volcanic pipes that go close to the earth’s heated center, as other colored diamonds are. They are also not graded in the same way as conventional colored and colorless diamonds are. A special scale that considers unique sizes and gradation of color are used.

Their process of formation has long been a mystery. The oldest and toughest diamonds around, they have a chemical spectrum indicating they originated before our earth formed. The high hydrogen atom content within them indicates they may be from a star-like environment. Supporters of this theory suggest they came to earth during an asteroid event when the continents of Brazil and Central African Republic were still one continent.

Others propose their formation is due to “shock metamorphosis” that happens with a meteor impact. Very few believe they formed during conversion of highly-pressurized organic carbon near the earth’s interior as with most other diamonds.

And then there are those who believe they formed inside an earlier-generation local giant star that went supernova. The most famous and perhaps best quality of all black diamonds is the Amsterdam diamond who gets its unique coloring due to the presence of tiny graphite grains located primarily within the feathers, as well as to diffusion mechanisms similar to what is observed in storm clouds. It is known to be one of the finest diamonds in existence.

What Does a Diamond Setter Do?