Why are colored diamonds generally worth less than white diamonds?

When choosing diamond jewelry, it is important to know some of the qualities and characteristics to look for, so that the highest quality and value are received. Regardless if it is for investment or gifting, knowing how to recognize value helps secure a great investment for the owner. 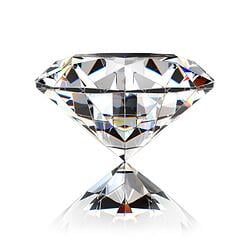 Diamonds are weighed by the carat, which lends it’s substance to the inherent value placed on the gem. The word carat comes from the carob tree whose seeds were used to determine uniform size and weight for small rocks. The carob seeds had uniform sizes and weights, and until the standardized system that weighed them in at a consistent one carat representing 0.2 grams was developed, people would compare them to the carob seeds to determine carat weight and value for each gemstone.

Carat refers to the weight of a diamond as expressed in carats. The word carat originated from the carob tree – the tiny seeds of this tree are well known for their uniformity and consistent weight. Traditionally, diamonds and gemstones were weighed against these seeds until the system was standardized, and one carat was fixed at 0.2 grams.

Also read: How Do Black Diamonds Get Their Color?

A carat is also divided into 100 points. If a diamond weighs a fourth of a carat, it is said to weigh 25 points. A 0.25 carat is ¼ carats and so on. In general, points are not used to describe a diamonds weight if it goes over one carat. The larger the gem, or the more it weighs determines how rare it is considered. A one carat diamond is more rare and valuable than two weighing half a carat.

In general, 250 tons of ore is mined, and then processed so that one carat of gem quality can be realized. Diameters of diamonds differ slightly because of this weight-based measurement system.

Blemishes can also include nicks and small scratches on the exterior of the stone. Finding a diamond with no inclusions or blemishes is very rare. These blemishes can only be perceived under intense magnification, as the naked eye cannot possibly perceive them.

It is generally known that the fewer the flaws, the more valuable the diamond. Clarity scales have been established to help value each gem by the number and extent of the flaws and inclusions found on and in them.

Even though most diamonds appear to be clear and colorless, most also have hints of yellow or brown. Scales of grade to measure the amount of color have been established. The most valuable diamonds available are completely colorless.

Also read: How Do Pink Diamonds Get Their Color?

If diamond earrings, necklaces or rings are being valued, they always go through this process of valuation through weight, blemish and color. Becoming familiar with these measurements and scales of value will help dramatically when choosing a gemstone or piece of jewelry, if quality is a priority.

The Basics of Making Cash for Diamonds in NYC

Why handmade Diamonds are Captivating for NYC Residents?