Pinky rings are different from other kinds of rings in two significant ways, neither one of which is the fact that they are worn on the pinky finger.  First, while many items of jewelry are generally specific to one gender or the other, this is not the case for rings worn on the fifth finger.  Both men and women are equally likely to be sporting one.  Second, unlike some rings worn on other fingers, the pinky ring does not carry any particular significance in terms of your romantic status. 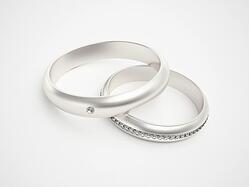 In some very limited situations, a pinky ring does represent specific information about the wearer.  Among engineers, for example, a steel or iron ring worn on the pinky finger tends to designate you as a member of certain organizations such as the Order of the Engineer.  In this case, the pinky ring is always worn on the dominant hand.  A pinky ring can also be associated with Mafioso status as it is a symbol of being a "made man" in the culture.

The Pinky Ring among the Rich and Famous

For more general purposes, however, the decision about wearing a pinky ring or not relies on current jewelry trends.  These, of course, are often influenced by the fashion choices of people heavily in the public eye.  The Duke of Windsor wore a pinky ring throughout much of his life; with his death in the early 1970s it could be argued that this particular piece of jewelry fell somewhat out of favor.  However, right now the current Prince of Wales wears a pinky ring.  Other notables in favor of them include Alan Flusser and André Churchwell.

The Pinky Ring as a Counterpoint

Some men find the pinky ring to be "in" at the moment because it can provide an effective counterpoint to a classically tailored suit.  The surging popularity of Armani as represented by leading men in popular films has meant that men's high fashion has moved into a rather restrained phase in which clean lines and subdued colors are heavily emphasized.

In such a fashion paradigm, it can be useful for a man to have a way to show a little more personality.  A shiny pinky ring in gleaming silver or gold can be a way to do this; such a ring also helps to catch the eye, making a man stand out a bit from others in the room who are also wearing what it has effectively become a sort of uniform for men in many walks of life.

Most fashion advisers are currently advising men to wear a pinky ring on their right hand.  This advice does not emanate from the fact that a large majority of men as right-handed.  Rather, there is a general perception that right now, too many other aspects of men's fashion mean that the left side of the body is accessorized.  Men tend to wear their watches on the left wrist; this is the same side of the body that features a pocket square or in more formal situations, a boutonniere.  It makes for a pleasing visual contrast to have a pinky ring worn on the right.  In addition, this practice can make sure that a man's right side does not look completely bare of decoration.

When all evidence is considered, the final conclusion must be that the pinky ring right now is definitely "in."