What Are the Noticeable Characteristics of Gold Coins?

For some people, coin collecting is a hobby that helps them while away the hours even as it provides them with a connection to distant times and places.  For others, however, the lasting value represented by rare gold coins or silver coins is also an important draw.  These individuals will want to pay close attention to the characteristics associated with the coins they purchase because such qualities can greatly affect the market value of a coin, which of course determines its worth as an investment vehicle. 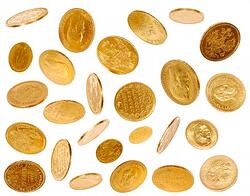 The first characteristic to consider is whether the coin in question has ever been circulated.  If not, it could potentially still be in mint condition no matter how old it may be.  Circulated coins, of course, will show some wear and tear.  The techniques used to evaluate the current condition of a rare coin are collectively known as "grading."  According to some, grading is a science, but since the process can be highly subjective, other coin experts regard it more in the realm of an art.

Also Read: 5 Gold Coins that are Worth Over a Hundred Dollars

An uncirculated coin, even one that has never sustained damage of any kind, is not necessarily the equal of an "identical" coin.  This is because a coin in uncirculated condition may have been struck with insufficient force or with a die and / or press that were in less than pristine condition themselves at the time of manufacture.  In addition, the way the coin was handled and stored since minting can have adverse effects on its final state.

One of the most important characteristics collectors look for is the degree of luster, or shininess, that a coin exhibits.  A high luster coin will gleam as if new.  Coins with lesser degrees of luster are sometimes referred to as "finely toned."  In this case the coin appears to be tarnished or otherwise mellowed with age.  Some collectors actually prefer a finely toned coin because it looks more like an antique; an old and rare coin still displaying high luster may actually appear to be a recent reproduction.

The worst surface on a coin is a result of cleaning.  True coin aficionados know not to perform any cleaning operations themselves as it invariably degrades the quality and causes the coin to fall into a lower grade.  It may seem obvious that a rare coin should not be cleaned with a harsh abrasive such as Borax, but coin collectors are equally wise to avoid even mild and gentle cleaners such as liquid hand soap.

The characteristic of "strike" refers to the crispness, sharpness, and depth of the image that has been struck onto the coin.  This can vary even among uncirculated coins, but in general, strike is more noticeably deficient in coins that have circulated for years or even decades.  When the image on the coin begins to look a bit smudged, the coin will fall into a lower grade.  Some coins have almost completely lost their images after generations of handling.  This radically affects their value.

Also Read: What can be Considered as Precious Stones?

Those who wish to begin collecting rare coins should do all they can to become amateur graders themselves as this will help them to more accurately evaluate the coins they are considering for purchase.

How Gold coins are appraised in NYC