What are the Latest Silver Fashion Jewelry Trends

The recent economic downturn of the past few years has left many things damaged. Investor confidence in nearly anything that is not tangible and traded by survivalists has been shaken, as have many different kinds of luxury items. While booming times may lend themselves to a lot of gold and platinum jewelry, during bad times most people cannot justify spending so much for something like that. With so many people losing their jobs, a bit less bling and a bit more austerity has grown popular, which has led to a few new trends. 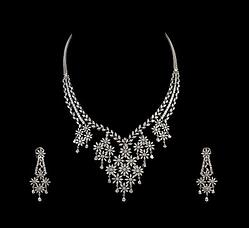 One of these new trends is silver fashion jewelry. Using silver to make up a bit more of one's jewelry collection, many people have discovered that not only is silver a far less expensive way to look great. Using silver for one's jewelry is a substantially less gaudy addition to one's wardrobe, and accents every color differently from gold.

Also Read: Why a Silver Chain can be Considered as Everyday Jewelry

Of course, one may not simply drill a hole through a silver coin and wear it on a necklace. While that could work well for a more beatnik or hippie look, the more mainstream ways to wear silver are in forms that might traditionally be filled by gold, but for which gold seems a bit less suitable nowadays. For example, a lot of engagement rings that would have been gold a few years ago have been shunned in favor of silver rings. While an engagement ring's value is primarily for the proverbial "wow" factor, silver's understated elegance coupled with a good stone can do very well to mark you as a couple with style and a note of frugality.

When a gold ring may set you back by $10,000 and a silver ring may only cost less than $1,000 for the same gem and the same level of workmanship, it makes a lot of sense to spend the rest for something else. If it comes down to an engagement ring alone or an engagement ring, half the down payment on your first home and a nice honeymoon vacation, this is an excellent trade off.

Charm bracelets are also coming back into style. The bracelet is an alluring way to draw the eye to a woman's wrist and hand, but charms had gone out of fashion for a few years in favor of more centralized, simpler looks. While a gold charm bracelet would only look right on the wrist of a millionairess, silver charm bracelets cost a small fraction of the money gold would set you back. Thus, silver jewelry's simpler charm is at home on any wrist, even when you are out in the garden. The greatest benefit of a charm bracelet is that it can be further augmented with additional charms over time, making each bracelet unique to its wearer's personality.

Also Read: Which Silver Jewelry is the Trendiest in 2012

A silver necklace is also a great way to draw attention while remaining subtle. With a silver necklace, the wearer's neck is highlighted but not shown in too overt a fashion. This makes silver a far better, to say nothing of less expensive, replacement for gold.

Silver is a great material for use in jewelry. Nearly as low maintenance as gold and far less expensive, silver is an excellent complement to the more austere times of late. Silver use in jewelry looks amazing, and says good things about its wearer's taste.

What are the Latest, Trendiest Gold Jewelry Accessories?