Which Silver Dollars are Worth More Than Their Weight in Silver

Silver dollars are great coins for a lot of reasons. For one, silver will always be a useful metal. For another, this is a material that looks great contrasting subtly against gold in any given collection. For still another reason why the silver dollar is a perennial favorite among collectors, silver dollars are potentially great trade items if fiat currencies ever take a fall from grace. It is better to have and not need instead of needing without having. The following are a few rare coins from history that are worth a good deal more than their silver content alone would be in any other form. 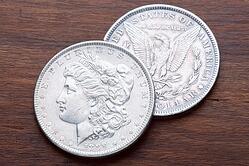 Prior to 1874 and the huge influx of silver from the Nevada Comstock Mines, there were massive printings of gold coins but relatively few of silver ones. This led to silver being worth a relatively large amount of money at the time. This, in turn, led to a smaller number of these coins appearing, particularly when the size of the coins was reduced in 1853. Thus, seated liberty dollars are valued highly for their rarity and their differentiation between pre- and post-1853.

Also Read: Information That You Need to Know When Selling Silver Dollars!

The 1804 dollar coin was not actually minted in 1804, but was actually a remint with a new die in 1834. These coins were minted in extremely small numbers as gifts for Asian leaders, with one version having only a single minting. Even though silver dollars were minted in 1804, those coins actually bore the 1803 mint date because of a mistake made at the Mint. Thus, these coins are unbelievably valuable, sometimes selling for millions of dollars at auction.

Morgan dollars are the second most popular collector coin behind Lincoln cents. These coins were minted between 1878 and 1904, and then for one year in 1921. If you find a fairly pristine coin from the earlier years, you have found a very valuable collectible where the value has little to do with its silver content.

The Earliest Examples of Silver Dollars in America

Between 1794 and 1803, the U.S. government minted silver dollar coins, ceasing for several years thereafter. However, when these earliest examples can be found in good quality, they are exceptionally valuable due to their rarity and their connection to the founding of the United States. Also of note is that since dies were engraved by hand at this point in history, there are numerous small differences between different mintings of the same coins. Many of these early coins were also circulated outside of the country in exchange for heavier Spanish 8 Reale coins, which would be recycled into new U.S. coinage.

The trade dollar coin has been as valuable during its initial circulation period as $5 in value. But today, the silver in this dollar is not the most precious thing about it. In the 1870s and 1880s, this coin was actually able to be purchased for roughly $.80 apiece because of silver prices and then used as a dollar within the U.S. Because of this, the trade dollar was not minted for circulation after 1878. Due to its limited production, this coin is exceptionally valuable today for its historical context.

Silver dollar coins are valuable to silver buyers for reasons beyond their material composition. In a lot of cases, the history of the coins is far more interesting than their silver content.