Platinum jewelry is the epitome of flash and shine, even though a lot of people can scarcely tell the difference between it and silver. However, the qualities that make platinum unique also make it a pleasure to buy . Other than its intrinsic value as a good investment and its rarity, when you buy platinum you are also buying something that is going to last you a long time and be valuable permanently in a way that almost nothing else in the world could be. 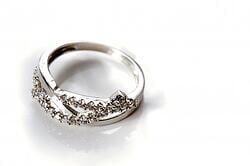 Platinum is a special kind of metal. While most kinds of metals will either react to air or water, platinum is almost entirely unreactive to most anything. It will neither rust nor tarnish under any reasonable circumstances. This is one of the reasons why buying platinum is a very safe way to keep your wealth in an attractive container. While most kinds of investments you will find have some element of permanence about them, platinum is one of the most stable things in the world. Of course, rarity also plays a role in it.

Also Read: How To Sell Platinum For Dummies

There is a relatively tiny amount of platinum in the world. While there is enough gold to fill several Olympic sized swimming pools, there is nowhere near that much platinum mined thus far. In fact, the most reliable estimates of how much platinum there is in the hands of mankind only places the amount at roughly a 10 foot by 10 foot cube. Thus, any platinum dealer has to know a lot about the metal itself to avoid having stock that is contaminated by horribly impure or falsified materials. It can be hard to tell the difference between platinum and silver.

The major difference between these two metals, other than the level of corrosion one can expect out of them over time, is their color difference. Silver is a more traditionally "metal" colored metal, where it can be confused with a shiny version of iron or steel under some circumstances. However, platinum is a pale gray-white metal that does not change color unless it is alloyed with something else. While there are metals like white gold and even colored silver, these are either alloyed with something else (such as platinum) or are colored in another, generally less permanent fashion.

Any kind of silver jewelry is going to be marked as such, and by the same token so will platinum jewelry. By far the simplest way to identify that a piece of jewelry is legitimately made out of platinum is to look for a small "Pt" on the side. As a general rule, this Pt is followed up by a number of some kind, and in general the number is an 850, a 900 or a 950. As in the case with silver, this number is a three digit representation of how pure the platinum is. The more purity that exists in a piece of platinum, the higher the value and the different the qualities are overall.

As is the case with any kind of alloy, the type of platinum you buy has the potential to vary considerably based on how much of another kind of metal is in there. In the same vein, the type of other metal that is alloyed with the platinum is also going to have an impact on its qualities. This can influence the color, making one of the above paragraphs something of a misnomer, and can even affect other characteristics of the final piece of jewelry. A good dealer can tell you all about the piece itself, and how its overall makeup impacts you as its potential owner.

What is a Jewelry Appraisal

What are the Latest Silver Fashion Jewelry Trends