Last year, Manhattan was victimized by fake gold manufacturers. Apparently, a ten ounce gold bar was sold in the market amounting to almost $18,000. The said item is unfortunately not 100% gold. The bar had tungsten in it. Based on reports, the weight of the gold content is the same as the tungsten content. It’s a 50-50 ratio. Since it is difficult to identify such counterfeited item, many became victims. To aggravate the issue, selling of fake gold continued for a time even after the initial discovery of counterfeit bars. 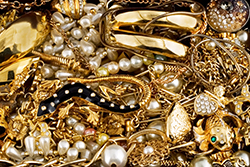 An old merchant who is known to sell Gold in Manhattan sold a significant number of bars to a man named Ibrahim Fadl. When the news came, Ibrahim drilled his gold bars which he bought for $100,000. To his surprise, he saw a huge percentage of gray tungsten inside the bars. The transaction went smoothly as the merchant provided serials numbers and official documentations for the sold items. Ibrahim bought them because he had previous successful transactions with the same merchant and that the items in question appeared to be gold (unaware that the inside was tungsten).

According to reports, the fake Gold bars originated in England, Australia, and Hong Kong. The source was a Chinese gang. They started making these fake bars few years back under Clinton’s presidency. This gang was able to make 60 metric tons of gold scattered in different countries. The sad part is, Manhattan was one of the victims.

Because of this incident, it is now more difficult to sell Gold in Manhattan. People are now cautious to the point that they stopped buying. This caused a slight drop to the jewelry business in Manhattan but not for long. Genuine buyers understood the fact that while there may be incidents such as this, the authentic sellers will outshine the fake ones. Fact is, there are authentic sellers that may also have been victimized; the more they need to get back the money lost and they can only do this if they continue to sell Gold in Manhattan.

To avoid being victims of fake gold bars, the best things to do is to buy or sell in small quantities. Even if you need to have a significant quantity, it is better to buy in portions. To sell gold in Manhattan may have been a challenge for a while, but it has picked up once again and their popularity definitely recovered and is back in the limelight. For now, it is better to be on the safe side by buying small quantities from well-known sellers if you want to be cautious.

If you want to sell your gold now in the Manhattan area then you must read this”sell gold” guide before selling anything.

Luriya, the #1 spot to sell your gold in Manhattan.

Facts to Sell Gold in Brooklyn With