5 Gold Coins that are Worth Over a Hundred Dollars

Many Americans today would be much wealthier had President Franklin Roosevelt not passed Executive Order 6102. In 1933, this order called forth all Americans to turn in their Double Eagle $20 gold coins in exchange for a crisp $20 paper bill, which at that time held the same value. Today these coins are each worth over $1000 if they are in fine condition. It is hard to imagine what you would do with these Double Eagles had your parents or grandparents not been made to give them up. 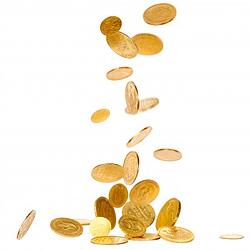 Many people have been scrambling to buy gold while its value has been rising over the past decade. Gold bullion is a tangible form of the precious metal to which investors are flocking. However, it is not solely the bullion bars that are worth purchasing for their high value. Coins made of this precious metal, such as the Liberty $20 Gold Coin, are worth anywhere from $1,500 to $20,250 depending on the year it was made, its condition, and whether the coin was at one time circulated money. The second of the Double Eagle Coins is the Saint Gaudens. Even a circulated and worn coin of this type is worth close to the gold value.

Aside from the Double Eagles, there are two types of $10 coins of gold that hold a high value today. The Liberty and the Indian, if uncirculated, are worth $800- $3000 depending on the year. Even if a collector had a 1932 Indian $10 gold coin in fine condition, the worth would be well over $700. It is not hard to believe that US gold moneys from decades past would be so highly valued today. Gold is a commodity that will never completely loose value, and especially in an unstable economic atmosphere, the value of gold will soar.

A $5 gold Indian coin from 1908 sold for $667 in an auction online at DavidLawrence.com in 2009. The declared worth of this coin today is $400-$500 depending on the condition. More than likely, this purchase was made by a coin collector. However, if the person who won the auction at a $667 bid decided to re-sell the coin during the peak of the gold market in 2011, they could have made a handsome profit. Just like gold bullion or jewelry, coins of gold are also subject to market fluctuations.

The Liberty is another $5 gold piece, which returns a high value. If you have a $5 Liberty dated from 1890 that was in fine condition it would be worth $389. However, if you had the same coin that was uncirculated its value would be over $1,600. Even the Classic Liberty $2.5 coin is worth over $100.

Coins made from gold have been valued by collectors for some time. However, with the market price of gold reaching such heights, investors have also gained an interest in these no longer circulated moneys. If President Roosevelt could have foreseen how the value of gold would skyrocket in recent years, you can wonder if he would have still passed Executive Order 6102.

How Gold coins are appraised in NYC

What Are the Noticeable Characteristics of Gold Coins?

How to Effectively Clean your Gold Coins