A Deep Dive into the World of Coins

Starting from the 5th or 6th century B.C.E, coins have been used as a form of payment throughout history. The first coins are said to have been made of electrum: a naturally occurring metal made from silver and gold. Over time, coins made of pure gold became standardized by civilizations like the Roman empire, eventually being accepted by economies around the world. The increase in gold imports from Africa increased gold coin minting throughout Europe until World War I. In the United States, the California Gold Rush was responsible for the mass production of gold coins and a shift to the gold standard; the U.S. economy had previously been backed by a dual gold and silver standard but switched over to solely gold after the gold rush.

Gold Coins and Collectors: How Did Coin Collecting Start? 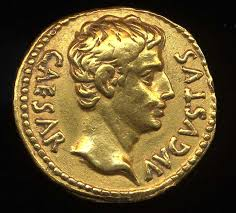 Interest in coin collecting has been found as early as in the time of Caesar Augustus, who several historians have cited as an avid coin collector. From then on, the practice of coin collecting became more popularized and as a result, more standardized. Books and pamphlets outlining specific guidelines for coin collections and for the valuation of coins started being published. The study of the actual coins themselves (also known as the study of Numismatics) became a more official and tightly regulated field. 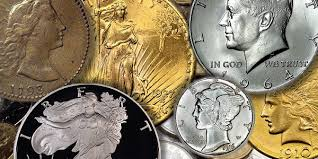 Coin collecting as a hobby has a rich history starting from the 14th century and gaining more and more popularity and increasing in accessibility. It originally started out as an exclusive hobby for the extremely wealthy, and more closely resembled art collecting. However, as regulations became stricter and valuable coins became more accessible, the hobby became a world-wide phenomenon. Nowadays, the market for coin collecting is huge, and extremely diverse. Some collectors are solely interested in antique coins: extremely valuable for their rarity and condition, but nearly worthless in terms of metal value. On the other hand, there are many collectors who only care about precious metal coins like government-backed gold and silver coins. Either way, because of this high and varied demand for coins, the market is extremely liquid for coins when compared to other collectibles. This unique liquidity is especially true for precious metal coins; in most cases, it’s possible to sell and receive payment for a gold coin within 48 hours.

When selling or buying gold coins, there are two main reasons for doing so: one is for coin collecting purposes, and the other is for gold bullion. There are distinct differences in how each transaction plays out based on these two reasons and two different end results too. For starters, the coins that collectors are seeking out are usually bought second-hand or through a third party. It’s very rare to see a coin collector buying an antique or rare coin from the body that originally minted it. This fact of the matter is, that collectors like to seek out rare coins, especially the kind that aren’t made anymore. On the other hand, people buying gold coins just for the value of their gold content, can buy directly from the minting facilities (e.g. federal banks of various countries). They don’t have to worry about the specific type of gold coin beyond simple preference since the price of these coins is mostly based on the price of gold at that time.

Most of the time, people think that gold bullion means gold bars, and they think that gold coins will be needlessly expensive or are exclusive to coin collectors. That is not the case at all! In fact, gold coins are often significantly more convenient and even cheaper than buying, handling, and storing whole gold bars. For most people, buying gold bullion is another form of investment, just like buying a stock. The liquidity of gold, or how quickly and easily it can be converted into cash, balanced out with its relative stability, are its two main attractions. However, when dealing with gold bullion in the form of a 400 troy ounce bar (troy ounces are the measurement standards used when measuring gold… troy oz=31.1g while regular oz=28.35g), everything becomes exponentially more expensive than when dealing with 10 or 20 oz. Every step of the process from shipping the gold, handling the gold, storing the gold, selling it again, (not to mention the security it would require at every point of this process) it all adds up.

Gold coins can be extremely profitable because they’re relatively stable, safe investment options, and have a high enough demand that they can be sold pretty much at the owner’s discretion. As gold coin collecting is becoming more widely known as a form of investment (just like having a solid stock portfolio is), the market for gold coins will continue to increase. Anywhere that sells and buys gold would be more than happy to buy gold coins because of their liquidity. Their aesthetic beauty, their stability from being guaranteed by the issuing government, along with their level of purity, all make gold coins extremely valuable and desirable.

Looking to sell gold coins? Or do you just want to know more about gold coins? Here are some key points of information about the most popular gold coins right now!

Since the American Gold Eagle coin’s first minting, it has become the US’s most popular gold bullion coin. It is responsible for more than 80% of the physical gold bullion market in the U.S. Based on the legendary St. Gaudens double eagle coin, the american gold eagle features lady liberty on its front side; on the other side is a depiction of an eagle returning home to feed its young. The coin is in high demand from both coin collectors and gold bullion customers alike for its history and aesthetic beauty.

When this coin first made its debut, it was extremely popular because of its 99.999% gold purity. Never before had a gold coin boasted such high purity. However, this very trait was the reason for its waning popularity. As more and more people began to buy the coins, they realized that while such high purity meant higher value, it also meant the coin was very soft. The coin was extremely vulnerable to scratches or scuffs that immediately reduced its resell value. Today, the canadian maple leaf still boasts enormous popularity but its usually transported and stored in highly sensitive cases that protect its face value for coin collectors.

Inspired by their world-famousrchestra, the Austrian Philharmonic features various instruments (four violins, a harp, bassoon, cello, and a Vienna horn) with the German name for the orchestra on one side. The other side of the coin depicts an organ: the one found in the famous concert hall where the orchestra performs. The coin was first introduced as 99.99% pure gold and was sturdier in relation to certain other gold coins. As time progressed, the Austrian Mint also began to produce coins of 99.999% purity. The extraordinary detail in the organ features on the coin have made the Austrian Philharmonic a popular coin amongst collectors and the Austrian Mint’s trustworthy backing has reassured gold bullion buyers as well. 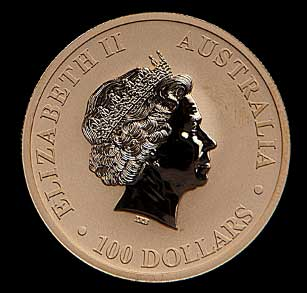 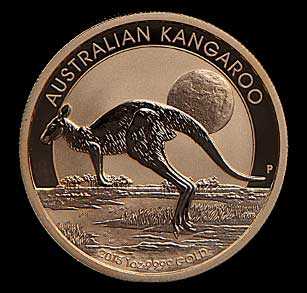 The gold Australian Kangaroo coin is unique in its frequent design changes. No other gold coin, besides the Chinese gold panda coin, changes its design as frequently as the Australian Kangaroo coin and it’s prized by collectors because of this. The coin originally featured a gold nugget depiction, but was then changed to a more widely known symbol of Australia--the kangaroo. After this change, the kangaroo depiction has since changed every year. The front side of the coin features the side profile of Queen Elizabeth II. 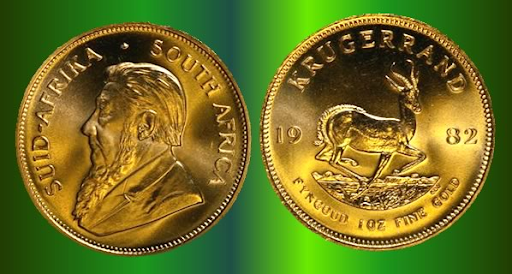 The gold Krugerrand was the first gold coin to be issued at exactly one ounce and they are guaranteed by the South African government/mint. Since their first release, tens of millions have been minted and this wide availability helps to keep the prices steady on the market. South Africa is the largest producer of gold in the world and minting gold coins like Krugerrands helps them efficiently make use of their large supplies. 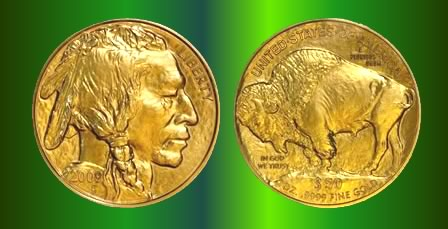 The gold American Buffalo coin was modeled after the original “buffalo” nickel, which featured the same Native American chief depiction. The side view portrait is said to be a combination of three different Native American chiefs, and was supposed to showcase the “native beauty of the American west”. 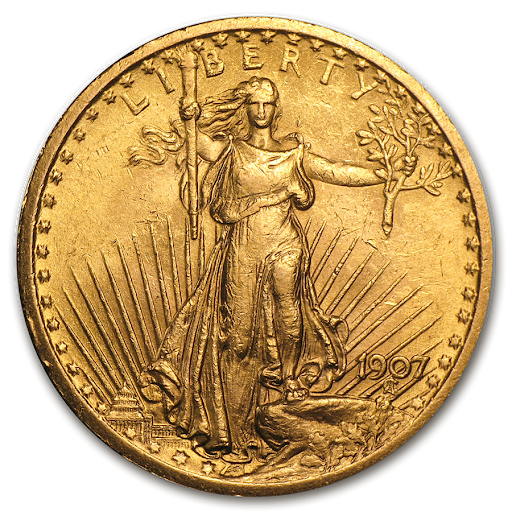 Widely considered the most beautiful coin ever created, the St. Gaudens double eagle is treasured by coin collectors around the world for its aesthetic excellence and rarity. It was first authorized by Congress in 1849 to control the enormous gold surge coming from California and other states in the US during this time. From then until 1933, the $20 gold coin enjoyed mass popularity across the country. However, during the Great Depression, President Franklin D Roosevelt demanded the recall of all gold--including all gold coins, in order to stabilize the crashing American economy. This adds an element of mystery and history to these specific coins because someone treasured them so much that they were willing to risk punishment in order to save them from liquidation. 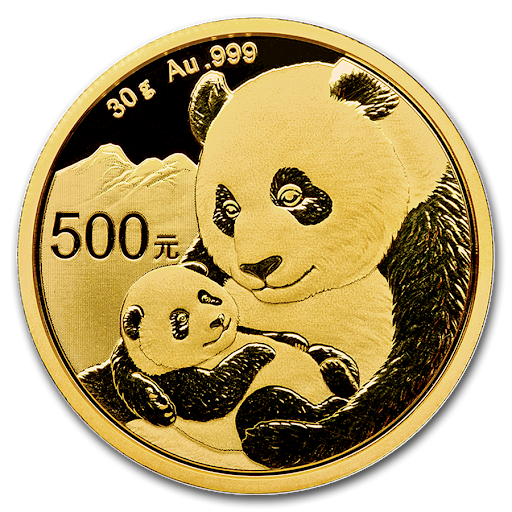 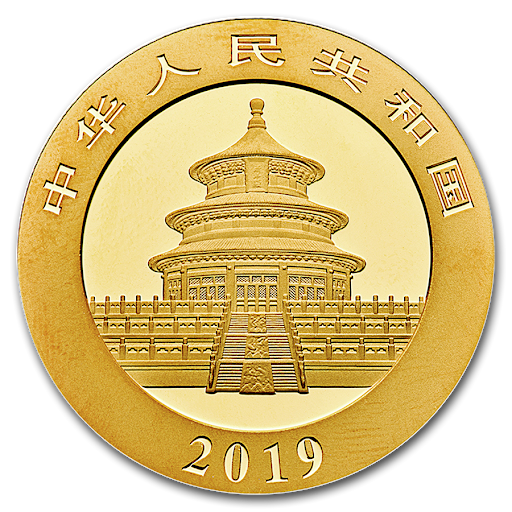 The building on the obverse side of the gold Chinese Panda coin is the Hall of Prayer for abundant harvest, that is found in the Temple of Heaven in Beijing, China. The temple is an iconic representation of China, as is the panda bear on the reverse side of the coin. Known for their unique fur coloring and mild temperaments, panda bears represent an important aspect of Chinese culture and history, and these rare animals are beloved all around the world. The coin itself is also unique in that it is one of the only gold coins in the world that gets redesigned almost every year.

While the value and price of gold remains relatively stable in comparison to the dollar or other currencies, it still changes fairly frequently. Many factors like geopolitics, and the economic health of various markets have affected the price of gold throughout history.

Should I Sell My Gold Coin?

Over the past 15 years, the price of gold in the US has more than tripled-- going from $435 to over $1,500. While, as mentioned above, there are many different factors that affect gold’s price, many experts suggest that this upwards trend won’t last long. Just as the price of gold surged upwards and went back down in 2012, an upwards surge in gold prices usually indicates a future crash. To get the most profit from your gold coins, it is important to analyze the market and figure out what factors might affect your asking price.

Looking for the Best Gold Coin Buyer in New York City? Luriya's Here for You!

Luriya’s expert gem and coin appraisers are licensed by the New York City Department of Consumer Affairs, and are vetted members of several stringent jewelry associations like JSA, MJSA , and Jewelers of America. They have been trusted by members of the committee for honest business since 1995 and bring this level of experience with them to every interaction. You can try out what Luriya has to offer with no pressure through a free appraisal/consultation for your gold coins to see if Luriya is the right match for you! Check us out at www.luriya.com.