All About Eternity Rings

You may have seen an eternity ring and been captivated by that small, perfect circle of diamond brilliance that surrounds it. Perhaps you even wear one or have given an eternity ring to someone significant in your life. But what is the importance of wearing one, and how did it become a symbol of eternal love?

First, let’s take a look at why people wear rings to begin with. The ancient Egyptians believed that the circle was a symbol of eternity. In fact, they even had a symbol that expressed the concept of an eternal cycle, called “Ouroboros”. The idea of a snake swallowing its tail signifies that the end is at the beginning, and vice versa. Putting a snake on someone’s finger likely proved to be impractical, so the idea of giving a ring as a symbol of eternal commitment was born.

The Egyptian symbol of Ouroboros.

Engagement rings have always been popular with young couples, but eternity rings are usually given by couples who have been in a relationship for some time. Of course, six months as a young couple might feel like an eternity to some, but save your money for the big milestones. What sort of milestones? The most common time to give an eternity ring is after the birth of a child. This is because giving birth signifies the continuation of the circle of life, and an eternity ring is a great way to commemorate that occasion. Some people choose to give an eternity band on their first wedding anniversary, although this is not strictly traditional. The customary anniversary to give diamonds is on the 60th wedding anniversary, but some couples might not want to wait that long!

So now that you’re looking to get an eternity ring, what style of ring should you buy? Since most people who get eternity rings are in a relationship, they could be wearing rings on their hand already (like a wedding or an engagement ring). Traditionally, the eternity ring is “stacked” on top of other rings you might be wearing on your left ring finger. If you have a yellow gold wedding and engagement ring, then a white gold eternity ring would look out of place on that same hand. What’s more, if you have smaller, closely spaced diamonds on a thin engagement ring (like in a pave setting), then having a chunky eternity band with large diamonds would look out of place. The idea is to keep all the jewelry you wear at once consistent. If you have a delicate wedding band and want to wear it with an eternity band, then make sure your eternity band is “delicate” as well. 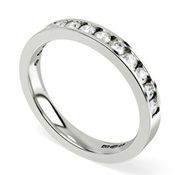 A good example of a "half" eternity ring.

The last thing to consider is how the diamonds will be held in their setting. The two most common types of setting in an eternity band are “claw-set”, and “channel-set”. A claw-set eternity band uses prongs to hold the diamond in place, similar to how a solitaire diamond ring is most often held in an engagement ring. This style maximizes the amount of light that enters the stone, and can be a great setting to use if you really want to show off the diamond’s sparkle. The only issue with this style is that claw-set diamonds are more prone to snagging and falling loose than other types of settings. If you’re looking for a ring that you don’t have to worry about as much, you might want to consider the channel-set eternity ring. In this type of setting, the diamonds are set within a channel around the ring’s circumference. This way, the diamonds sit flush with the top of the ring, and are much less likely to snag on other objects. The downside to using this setting is that not as much light enters the diamond when compared to a claw setting, but it can give you peace of mind when going about your day.