Ancient Byzantine Jewelry at The Metropolitan Museum of Art

The Metropolitan Museum of Art otherwise known as the Met, is located on Fifth Avenue in New York City. The Met showcases over 5,000 years of art from around the world. Everyday, the met is visited by millions of people seeking to experience the various exhibits on display in the museum's two-million-square-foot building.

Located In the medieval art section of the Met is a stunning collection of gold jewelry from the Byzantium empire. These pieces are dated from 330 AD to 700 AD. In 330 AD, ruler of the Roman Empire, Constantine The Great, transferred the imperial capital from Rome to the ancient city of Byzantium, which he renamed Constantinople. Greco-Roman jewelry making and metalworking traditions were carried over to Constantinople under the Byzantine Empire.

Christianity had a substantial influence on the jewelry of the period. As Christianity became the dominant religion in Byzantine society, Christian imagery was increasingly found in its jewelry. Crosses appeared by the fifth century while the Virgin Mary, saints’ angels, and other holy figures became popular in the sixth century. These images were thought to protect the wearer, aid in prayers, and even perform miracles, oh my!

The Byzantine Empire was surrounded by gold mines which granted access to gold and gold trade. Gemstones were also very popular at the time. Gems came from Persia and India in vast amounts. Garnets, pearls, sapphires, emeralds, and beryls were some of the most sought-after stones.

Gold necklace with ornamints, Byzantine found in 1902, at Karavas Cyprus made in 500s

“She was decked out with Gold ornaments, Pearls and all sorts of precious stones, resplendent in luxurious and expensive clothes. Around her neck were necklaces and strings of pendants and pearls.“

Description of the fifth-century holy woman pelagic of Antioch before her conversion to Christianity.

The wealth and prosperity enjoyed by many during the early Byzantine era is demonstrated by the expensive jewelry produced during the period. Adornments from the 4th century are seen in paintings, mosaics, ivories, and manuscripts from Egypt, Constantinople, Rome, and France. Over time, they have been excavated at sites throughout the Byzantine world.

Jewelry played a significant role in how people expressed their status and was often used as a diplomatic tool. In 529 AD, Emperor Justinian created a law called “Justinian Code” which stated, “that sapphires, emeralds, and pearls are reserved for the emperor's use, but every free man is entitled to wear a gold ring.”

Byzantine royalty loved having their bodies covered in jewelry. From headwear to earrings, necklaces, and body jewelry, these people would wear as much as humanly possible. Stacking bracelets and layering necklaces were just as important then as it is now in modern jewelry trends. Earrings would usually be large hoops with crescent shapes or have stone pendants at the bottom. Large gem-set necklaces were popular among women while men favored gold bracelets and pectoral ornaments, such as brooches as military decorations. 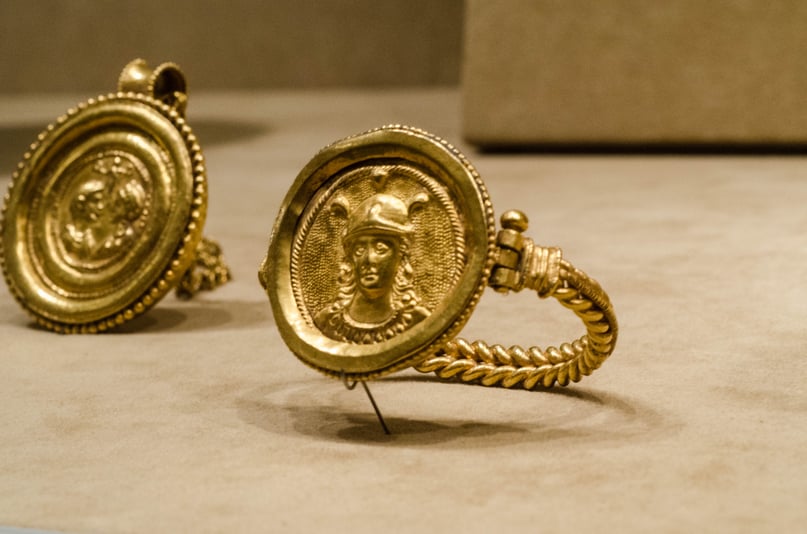 Bracelet with the Bust of Roma Made in Rome Byzantine, made 400–450

The jewelry from the Byzantine empire is an artform in itself. The surge in Christianity and fondness of jewels and precious metals created a trend among the Byzantine people and royalty that wasn’t seen before in the old Roman empire. Gold pieces went from thin and delicate, to thick, heavy, and complex. Byzantine jewelry even changed the way following empires viewed and rated gold. To this day, Ancient Byzantine jewelry trends are always in and out of style. If dramatic gold pieces are your thing, then don't be afraid to dress it up like royality. 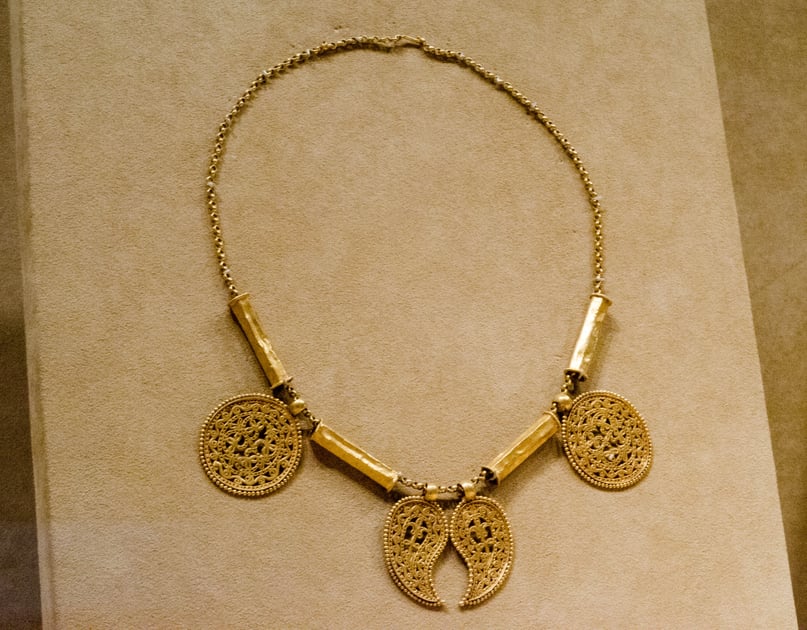