We’ve all seen the occasional stranger pull a pocket watch out of his or her pocket, click it open, and check the time. Maybe you personally own one or have a friend who does, or maybe you didn’t even know they still exist. These gorgeous and historical timepieces paved the way for more elaborate and advanced watches, from the wrist watch, all the way to the Apple Watch. But what are they worth now? What purpose (if any) does a pocket watch serve in 2018?

The History of the Pocket Watch, a Journey Through Time

A portable time piece carried in the pocket of the owner, pocket watches entered the scene in the 16th century and were extremely popular until after World War I. The pocket watch was born when mechanical engineering advanced to the point where simple spring devices were a mundane creation. This invention was revolutionary to the world of watchmaking as German inventor Peter Henlein began to create watches which used mainsprings as opposed to weights as a source of power. These small, portable watches were the first of their kind and were attached to various metal chains. Traditionally, these watches were worn around the neck.


While early models of the pocket watch were bulky and egg-shaped, they were used as pendant watches as opposed to pocket watches. As the industry expanded, they became flatter and in 1675, a new and more compact style of the pocket watch emerged. Charles II of England was the first to introduce the trend of wearing a slimmer watch in his pocket.

This trend spread across Europe and North America and further advanced upon the invention of glass production. At this point, pocket watches became all the rage and were seen as items of luxury. They received a large amount of attention from fashion designers and innovators. As time went on and we made our way into the 17th and 18th centuries, the pocket watch did its own share of time traveling. The technology of the pocket watch began to advance as more wheels were added within the watch - reducing the number of times it needed to be wound.

Pocket watches became an easy indicator of a member of the upper class society. The designs began to appear in finer metals such as brass, gold, and silver, as opposed to steal. Different jewels were implemented as well and the designs were further enhanced with precious rubies both on the outside and inside of the watch. Watch manufacturers in Germany, Italy, and England continued to supply the watches across Europe and by the time the Industrial Revolution rolled around, the watches became an important part of middle and lower class society as well.

I’ve been working on the railroad…

These watches were of particular use to railroad workers in the 19th century.

They used the watches to keep time which was important in order to avoid accidents, collisions, or derailments. As a railroad worker, owning a particular grade of pocketwatch was absolutely essential and was eventually ruled as mandatory by railroad companies.

The Migration from Pocket to Wrist: But Why?

In the years leading up to World War I, the pocket watch took a sad back seat in the world of watchmaking. There are many reasons as to why the wrist watch became the popular next step in watch fashion. In the 1960’s, the electronic watch age emerged and was soon followed by the quartz watch a few years later. Technology played a large role in the disposal of the mechanical watch and a drive to have the newest and most updated time keeping device. During WWI, it was common for officers in the field to use a wrist watch. It was much more convenient and easily accessible than storing a watch away in your pocket.

Wearing a pocket watch was seen as feminine and impractical -- even though they remained in style out on the railroads as their popularity continued to decline in other places. For a more detailed look at this ruthless yet fashionable transition, check out this article from the New York Times.

Of course - all of these things make sense. In reality, the change occurred do to an error in functionality. It is much easier to simply glance down at a tiny and lightweight watch, as opposed to fishing one out of your pocket and cracking it open. This transition carved the path for watches as men’s fashion. Before the 20th century, wristwatches were worn by women only as a fashion accessory as opposed to a practical timepiece for the battlefield. in 2018, the luxury watch continues to be a staple of men’s fashion.

What’s the Significance of a Pocket Watch in 2018? 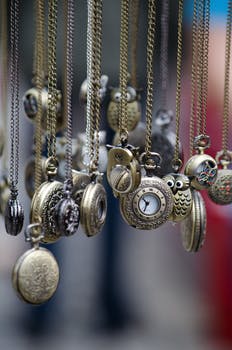 These days a pocket watch wears many hats. Many companies have tried to make them popular again by labeling them as classy and timeless. While pocket watches are stunning and heavy with history, they will forever be labeled as impractical and used only on unique and special occasions. They are collectors pieces and in some countries, are received as a gift when an employee reaches unemployment. While smartphones and fidget spinners crowd the pockets of the millennial generation, there is simply no room for anything else. So, unless it's a family heirloom, a wedding gift, or a piece of jewelry you've always wanted, your best bet may be to sell your pocket watch.

So, if you happen to own a pocket watch and not a monocle, perhaps it's something you don't actually need. Many jewelry experts reccomend selling your pocket watch as it doesn't look like they're coming back in style any time soon.

But watch out - just because your pocket watch is old, doesn't mean it's antique, warn experts at Luriya. Something is antique if it's a brand name from a rare collection, or if it's limited addition. By getting your pocket watch appraised, you'll be able to learn its value and make your next move. If you're looking to sell your pocket watch or sell your watch, you know where to find us.