It’s that time of year when everyone starts speculating on who will design this year’s Super Bowl rings. Will it be a championship ring specialist such as Jostens, designer of the Ravens’ rings last year, or a big-name retailer such as Tiffany & Co., who designed the New York Giants’ rings in 2012? 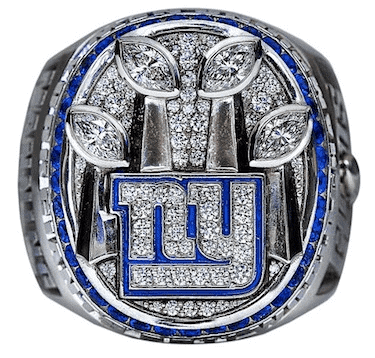 Each ring for a winning team’s player's costs about $5,000 to produce, courtesy of the National Football League.

Of course, now is also the time of year when those who own championship rings from Super Bowls past take advantage of the buzz to sell them off – and they’re going for a lot more than $5,000.

As championship ring designers vie for the privilege, paycheck and marketing bonanza of designing the Seattle Seahawks’ giant baubles, rings from past Super Bowls are popping up at auction.

Former Ravens running back Damien Berry pocketed $43,008 for his XLVII ring this winter, after winning it just last year. Berry initially denied selling the ring, until the firm he sold it through, Goldin Auctions, produced a signed contract.

There is a certain shame that goes with the financial necessity of selling off your trophies – especially that soon after the glory of winning them. But forget privacy when it comes to auctioning off a Super Bowl ring, because it’s inscribed with the player’s name and team number. That is, after all, what adds so significantly to its value – provenance, in this case, a slice of American sports history.

It usually takes a few years for pro athletes to fall on hard times and have to turn to their rings as an emergency fund. At the same auction, another former Raven, linebacker Jamie Sharpe, got $36,883 for his XXXV ring, won in 2000.

Goldin’s auction reveals that even a winning team’s production crew gets rings – and while they lack both the bling and the name cachet of the players’ rings, they too sell for far more than their intrinsic value – especially if the owner was associated with a major scandal.

A simplified, zirconia version of the Patriots Super Bowl ring awarded to “Spygate” videographer Matt Estrella just sold for $15,810. Estrella was an intern in 2007 when he was caught filming signals by the New York Jets coaches, breaking league rules. Patriots coach Bill Belichick was fined $500,000 and the Patriots were fined $250,000 for this breech. Estrella sold his ring in May 2012 to someone who then auctioned it off this winter – probably for a whole lot more than he paid for it.

Buyers should beware, however. Because of the way the original championship rings skyrocket in value, it’s not uncommon to find replicas being passed off as authentic. You can find plenty of replicas on eBay, most of which are made in China and labeled as such. Expect to pay a premium for quality reproductions produced in silver with decent cubic zirconia. More often, these rings are produced of copper thinly coated with silver that quickly wears off and tarnishes. You get what you pay for, and sometimes not even that.

But no matter the quality, the real value comes in the genuine article and the slice of history in contains. If you come across an important trophy ring, especially one connected to a player (or even videographer) of some renown, you can be pretty sure it has a solid market value – but an expert appraisal is highly recommended before you put your money down.

How to select the perfect sports watch for you