What Is Gold's Price Today and Why? Let's Talk About Gold's Value

“‘You have a heart of gold, ‘Good as gold,’ ‘A gold mine of information,’ ‘Worth its weight in gold’’. Have you heard any of these phrases? If you have, it may give you an inkling of an idea of what gold means to people.

Gold: it’s pure, attractive, valuable, and worth lots of money if it’s real. CNBC just published an article about how gold prices today have reached an all-time high in the past five years. What exactly have gold prices been like over time? Let’s take a look into the price of gold.

Since ancient civilizations first discovered gold, they saw it as a hot commodity. In Lydia during 643 B.C., people started using gold as a form of currency. Then in 50 B.C., the Roman's discovered how to make the first gold coin. Gold was one of the most popular currencies brought into the barter system considering its rarity. Especially since you can morph gold into any shape or size, it is not too difficult to carry around.

When it became big in the United States, the gold standard was born. This act took place after the Gold Rush in California, and it meant that gold was the only metal you could use to trade for paper currency. At the time, one ounce of gold was $20.67.

Countries decided to suspend this practice during WWI because of the inflation of paper currency. Though they tried to adopt the standard again after the war, Nixon ultimately dropped it in 1971. Tying the value of a currency to gold means that a country cannot increase the amount of its currency without increasing their gold reserves. During the time of the Great Depression, this started to become economically restricting. The government didn't want people to deplete the sources of gold in the country, and people were hoarding gold because the interest rates kept rising. After all of this, Nixon decided to cut the dollar's association with gold so that the interest rates could decrease and so that money could be created to put into the economy.

Gold has always been a symbol of wealth. It is not something that can be created nor destroyed, therefore it proves to be a worthy investment. Gold is also recognized globally for its worth. This makes its popularity widespread, meaning it is even more desirable.

Now, what are the different karats of gold? What is their purity?

While it would be awesome to wear 100% pure gold, it is nearly impossible. Most expensive gold jewelry made today is actually an alloy, which means that it is a mix of pure gold and other metals. This makes it sturdier and less prone to breaking since pure gold is so easy to morph.

24 karat: I’m not sure if you’ve heard the song “24 Karat Magic” by Bruno Mars, but magic 24 karat is. Twenty-four karat is the purest form of gold out there, and it is also hard to come by. This is the piece to buy if you want to make an investment. Though it is pure, it is also so soft and malleable that it’s hard to use to make jewelry without mixing with another metal.

18 karat: This type of gold is 75% pure and is an ideal option for making jewelry since it doesn’t bend or mold as easily as 24k.

10 karat: 10-karat is the smallest concentration of the metal at only 41% pure gold. It may hold a lesser amount of gold, but it is much more affordable than other forms, which makes it useful.

Other factors that are a part of making gold jewelry are the types of gold and how jewelry makers use it to craft a piece.

Over the years, the price of gold has fluctuated. According to information from Kitco, the amount that metal is worth has been steadily growing since 2000 and has an overall 382% increase.

Another aspect to consider is gold plating and gold filling. Gold plating is when another gold externally covers another metal. Gold filling means that a sheet of gold is wrapped around a base metal through pressure. Unlike gold-plated pieces, with gold-filled jewelry, you can find a small amount of gold.

Gold plating and filling do not usually have a high concentration of real gold. The external layer is gold to give off the impression that it is real though it is not. This is a practice that is popular when making jewelry because it is cheap, but if you're looking to invest, you should know the difference. Besides yellow gold, other types of gold that are becoming more popular are rose gold, white gold, and green gold.

So why does the price of gold fluctuate so quickly?

According to the American Bullion Inc., much of the current price of gold has to do with the economy. Central banks possess a large amount of gold, and they are also the main sellers of the commodity. However, as the supply and demand of the item shifts, banks will switch from selling to buying so that they hold power in owning a large sum of the metal.

In terms of supply and demand, another contribution to the price of gold relates to how much of it there is. Gold has always been a smart investment- even when the market drops and other currencies lose their value, gold will always be prized. It is much more sparse than other types of currency.

As the value of the dollar decreases, investors believe that the price of gold will continue to rise. In the past, gold has always stayed consistent as currencies lose their value. If the price of the currency dropped, gold is a good choice to combat the loss.

Gold prices and importance around the world?

In terms of gold price history, its value steadily increases as time goes by. However, the price of gold will sometimes quickly rise and drop depending on other economic factors. For example, the Bureau of Labor Statistics reported that following the 2008 recession, the price of gold skyrocketed. In 2008 its price per index (PPI) rose 2.6%, and in 2009 it increased by 12.8%. Over the time period of September 2010 to September 2011, gold's price went up 50.6%.

The BLS report also stated that the price of gold often reflects the health of the economy. If the economy is doing well, investors like to focus their attention on stocks and real estate. When the economy is struggling, people look to gold as an investment because it will hedge against the decline of paper currency. Check out the gold price chart below for an overall look at the incline. 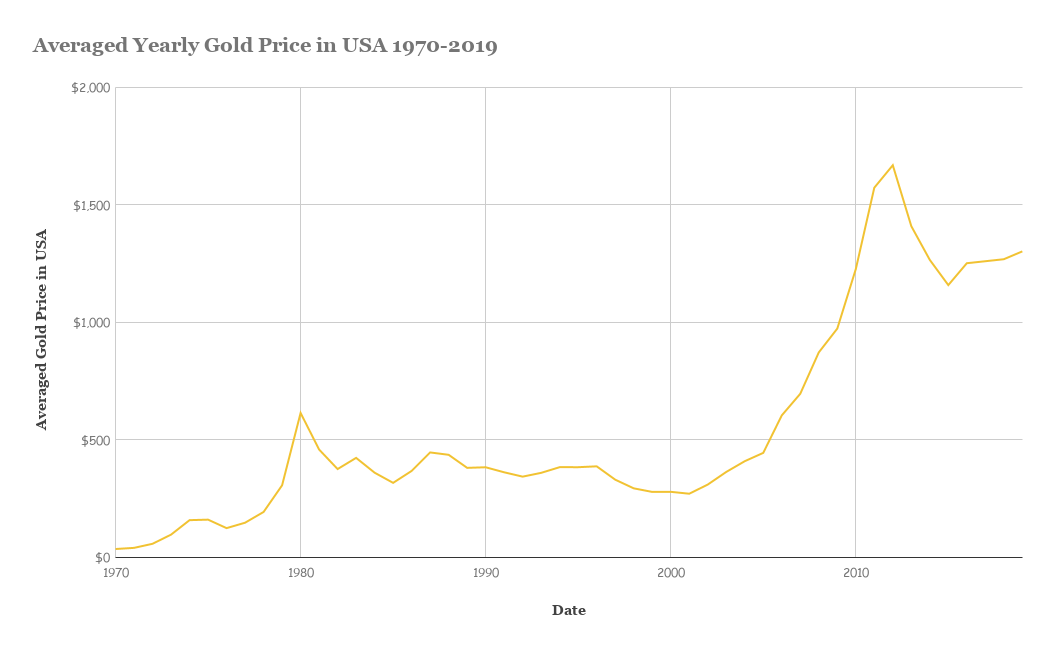 The chart above portrays the average yearly gold price in the USA from 1970-2019 as determined by MacroTrends.

The United States has the largest reserve of gold in the world, yet a bunch of other countries also highly value gold. India is the number one country to utilize gold. Especially during wedding seasons and festivals, the price surges. Gold has always been a valued investment, and it is a clear sign of symbol and status in the country. Since so many people value gold in India, it is still possible to use it as a currency of sorts. However, a majority of households in India save gold instead of making it a part of the country's currency. It has large historical importance that has carried on into the modern day.

Since the moment it was discovered, gold was important to our world. In a financial, personal, and cultural sense, we love gold- and its evolving price reflects that.